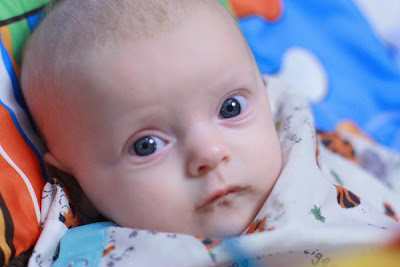 In the next few days we spent majority of the time snuggling our sweet ray of sunshine. The difference between a child an adult having surgery is incredible, Mal bounced back the very next day. Although when she woke up from surgery she lost her little baby cry, we also gained a very very big brave little girl. It took days for the swelling to go down, she gained almost a whole pound from the surgery alone. We received news that day that Mallory had NO CANCER IN HER BONES! One little piece of the puzzle, we had to wait on the pathology from the tumor, and also the MIBG, and bone marrow to know exactly what we were dealing with. After much reading and research, we knew what we wanted, no neuroblastoma in the bone marrow or bones, we wanted favorable histology, and no m-nyc amplification for the best possible news. The waiting game was the worst.

They prepared us for going home by showing us how to change the patch on her chest (which we had to do every 4 days until she was 6 months old), flush her lines with VCH every morning, and she would be started on many different medications. At the time I felt a huge pain of disapointment at the fact that they could not remove the other tumor. I know that the surgery would have put her at risk, that she would be on medication for the rest of her life, but there are very few cases of double adrenal tumors. And we just wanted our daughter to live, we would deal with whatever life gave us but knowing that they were leaving a significant sized tumor in her little stomach was huge to us, but you have to learn that you are there to love, and they are there to take care of everything that involves her health.

She received her first blood transfusion the day after surgery, her hemoglobin was quiet low, although she did not lose a whole ton of blood during her surgery even a little bit for a child weighing 11lbs is a lot. I'll never forget the little syringe of blood that they used, this was the first of many transfusions she would have.

We had a hard time through a lot of this with our friends and family, we tried to be as upbeat as possible. And yet when someone would walk through the door there hearts would sink, in the beginning it was the nurses that kept us going. They hugged us when we cried, they laughed with us, they've seen the best of the best and the worst of the worst. It was tough and at one point I came right out and said it's ok to cry, it's ok to laugh, it's tough for us to even begin to understand. This is our daughter and without everyone's support I honestly don't think we would have made it out as a whole. 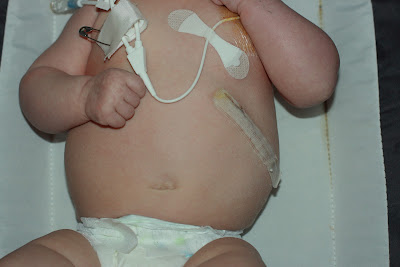 We spent 8 days there, the longest 8 days of my life, Ryan stayed with us the entire time. We had our final meeting before we were discharged because I didn't want to go home without answers. I couldn't bear the thought of having a sick child, of having to take her home without knowing what they were going to do for her. We met with an oncologist (which I won't say her name but trust me I still hate the lady), our social worker, our discharge nurse, and two of our other nurses. We were told that the preliminary pathology report was showing no sign of n-myc amplification and favorable histology, this was not a for sure answer but from what they could see it was looking in our favor. I still didn't want to bring her home, honestly you had us a big pile of SHIT and expect us to just "deal with it", the oncologist said to me "If you can't take care of her, I'm sure we can find someone that can". At that point I wanted to reach across the table and punch that lady in her face. I remember saying to our social worked "DO YOU HAVE A KID WITH CANCER? KIDS DIE FROM CANCER" and he in his sunshine and lollipops attitude says to me "We don't like to think that way". Well of course you don't, it's not your kid.


We got to go home for 1 day after that, I had a bad taste in my mouth for some of the people we had worked with but when they gave us our Oncologist I was pleased. We have Dr. Axtell, which some of the people I've talked to don't care for him, but we LOVE him. I told him straight up that we didn't want the "whole package of reports", when they got information we wanted it good, bad and ugly.. He is a no bullshit kind of guy, he is incredibly smart, and from the 1st time we met him we had nothing but respect for him.

We spent our first day at home, feeling like new parents. New parents with no "manual" for what to expect. Our expectations where no longer there, we just wanted her to live.